Skyfall hoopla broke and passed without pulling me to a theatre, but it sent my thoughts repeatedly to the Furka Pass and the head of the Rhone Valley. James Bond and Tilly Masterson drive the pass in Goldfinger on a day of big summer clouds. Bond so does not worry: We—my mother and father I—worried the entire way. We drove down in the dark, the last night before the pass closed for the season.

We’d thought ourselves prepared with water, snacks, full tank, Michelin Guide, some other hotel guide thick with places Michelin didn’t list. We were a family who traveled by atlas. Lunch was warm, croque monsieurs, tea, and sun full at last at the bottom of the Lauterbrunnen valley after a morning hike. In the atlas that we pressed open on the table as we ate, the route seemed a good afternoon drive: over the Susten Pass, up the approach to the Saint Gotthard, over Furka, and down the Rhone Valley to the railhead for Zermatt. Google estimates the drive at 2 hours 52 minutes (16 hours 54 minutes by bicycle). If you’re Jean Yves Blondeau, you can make the descent in your personal Iron Man rollerblade suit. I haven’t seen noted the incidental consequences of the Saint Gotthard segment being a main Euroroute to Italy. Traffic halts. Brakes and truck gears echo above and below off the cliffs. In months of short sun the high peaks cut off afternoon, and afterward everything is dim.

The Goldfinger shots crop so close on the car chase that with the somewhat random rear projection backdrops on shots of Sean Connery and Tilly Masterson driving, the vertical scale softens or compresses:

The lanes are a 1930s width, like the more harrowing sections of the Taconic Parkway, except thousands of feet more harrowing. Railings in places, low parapets in others would complicate, not stop a fall. Mostly there are no railings or parapets. The road bends back upon itself and runs along straightaways on which oncoming drivers and drivers behind you expect straightaway speeds. You have a forearm’s length between your tires and air. After an hour it seems you’ll never relax again. 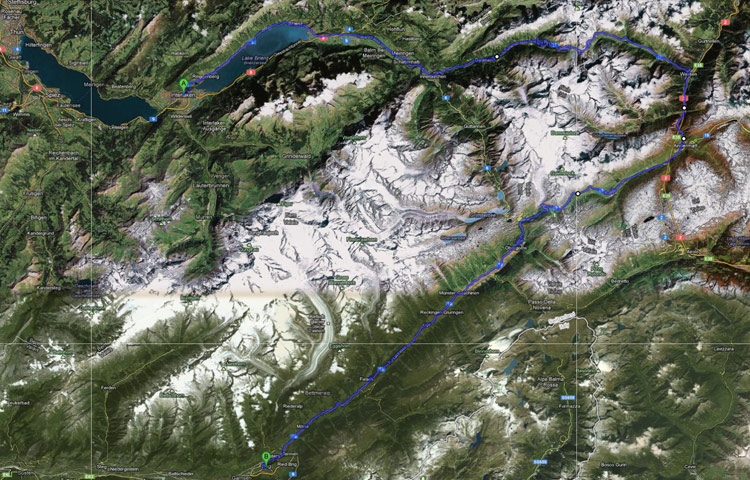 I think that being so far above the tree line had more to do with my response than did the altitude (Furka crests at 7,969 feet). I didn’t feel short of breath or develop a headache. But a layer I hadn’t known I had, some conceptually protective membrane, peeled back. Nothing familiar beyond the car and the ribbon of pavement remained to refer to. Grass was brown until the next May, rock bared at such uninterrupted expanse that, as daylight bled from the peaks and snow patches glowed unmoored against the dark, I could guess no distances, only that enormity was close and I wanted to be indoors with curtains between me and the night.

We missed the signs for the Bond locations. The Hotel Belvedere was closed for the season. We looked back and saw headlights strung all along the switchbacks we’d descended. The moon rose over Italy. High snows shone faintly. We stopped in one town and found no hotel; in another town, no hotel open. My father parked and left my mother and me and came back from a hotel he said would not be a good place, and we drove on to the next town, Brig.

We can’t have found our eventual hotel so very late. Dinner was still being served. In the morning we woke with an Alp seeming an easy run from our window, all gray cliffs and limp yellow larches. At the turn to the highway the signs for the high passes, Furka, Saint Bernard, Grimsel, Susten, and Simplon had flipped to CLOSED, and the one way was onward, downstream.

This happened when Reagan was president. I wonder how late in the season the passes stay open now, if the Rhone Glacier is still close enough to walk to easily from the pullover spot on Furka. I haven’t returned since.