These undated photos must have been taken between 1909-13. Downtown, the Woolworth Building is still an indistinct block, lower than the Singer Building; in Midtown, Grand Central Station (post-Depot, pre-Terminal) is in its last years. Madison Avenue is still lined with high-stooped brownstones, but the new public library is visible in the upper left, below it the dark mass of the Waldorf Astoria that in twenty years will be demolished for the Empire State Building. At right the Queensboro Bridge spans the East River across Blackwell’s (not yet Welfare, not yet Roosevelt) Island. The photographer is at the top of the tallest building in the world. 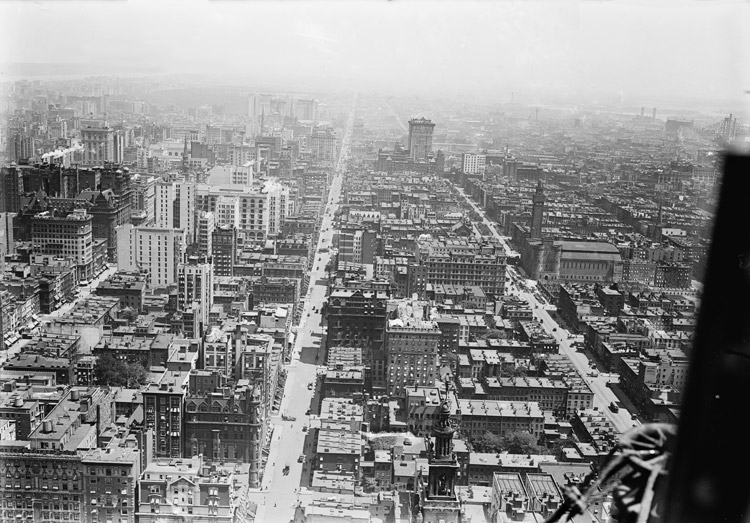 Looking Up Fifth and Park Avenues

I find intense temporal vertigo here. Most of the old photos that circulate through Tumblr are either of scenes so evidently remote from the present, so artfully composed by Alfred Stieglitz or Berenice Abbott, or so consciously cropped, that they register as art, to regard, not to step into. Here, visual scale makes plain a century’s difference in building but erases difference in technology and manners. The now-demolished Singer Building owns the downtown skyline, the vanished El runs down Fourth Avenue and Bowery, but districts have their familiar shapes. Were I to descend the elevator from the 1909 observation deck, I would be able to find my way to buildings I’ve lived and worked in. The IRT would be at the foot of the building to take me to Brooklyn; downtown, there is the Paragon Sporting Goods building, the campanile off Washington Square, the huge white building off Astor Place that’s now a Kmart (is it still?). I could not vote. In a few years, I might be taking tight steps in hobble skirts—or, with my ancestry, more likely be sewing hobble skirts, and accouterments.

In the lofts to the left of Washington Square Park, women are locked in the Triangle Shirtwaist Factory, with a few years until they burn.